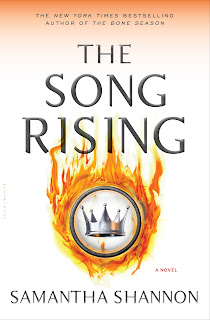 No safe place. No surrender.

Following a bloody battle against foes on every side, Paige Mahoney has risen to the dangerous position of Underqueen, ruling over London's criminal population. But, having turned her back on Jaxon Hall and with vengeful enemies still at large, the task of stabilising the fractured underworld has never seemed so challenging.

Little does Paige know that her reign may be cut short by the introduction of Senshield, a deadly technology that spells doom for the clairvoyant community and the world as they know it . . .

The Song Rising is the third book in the Bone Season series.

On sale everywhere books are sold.

Add it on Goodreads

Listen to the playlist


‘Evocative, smart, and exciting [...] Shannon vividly and purposefully realizes each meticulously detailed setting, from London's underground to outposts in Scotland, while infusing her imaginative, passionate, and gripping saga with profound insights into humankind's long, bloody history of tyranny and the radiant ones who zealously fight for freedom and justice.’ – Booklist

‘[N]ever less than captivating. A tantalising, otherworldly adventure with imagination that burns like fire – Kirkus Reviews

‘[E]ffectively mirror[s] current debates on immigration, violence, and equality. It is within the descriptions of this clairvoyant world that Shannon's writing shines[...] This is a solid addition to the series’ – Library Journal

‘Shannon’s exploration of a futuristic, perilous Europe remains engaging and evocative [...] The narrative is fueled by a constant sense of tension, as well as both internal and external conflict’ – Publisher's Weekly

‘Easily the most politically engaged of any of the dystopian fantasies’ – Scotsman
‘Paige shines as she finally gets the chance to take the fight to Scion, but also realizes that straightforward revolutions where "the world stands with you in your fight... [exist] only in daydreams." High-stakes play often ends catastrophically. The many-armed Scion monster receives further detail, growing into a fully formed evil empire with hints of conquests soon to be attempted.’ – Shelf Awareness

‘A story of strength, determination and the painful choices that must be made in order to secure their independence. The Song Rising continues the arc in The Bone Season series perfectly, setting the scene for a revolution in this dramatic world of magic. Fans of the series certainly won't be disappointed, it's an enthralling read that's full of surprises, and a gripping read from beginning to end.’ – Starburst Magazine

‘This is an ebullient, gloriously complicated fantasy [...] the characters feel grippingly real. Shannon unravels her tangled tale in galloping prose, which will carry even the reluctant readers to the very satisfying end.’ – Telegraph ✮✮✮✮✮


Please consider pre-ordering The Song Rising from your local independent bookshop. Alternatively, you can click one of the links here to pre-order from a retailer online.

A special limited Collector's Edition of The Song Rising, signed by me, will be released on the same date as the standard edition, and for the same price, in the style of the original hardback covers. There will be a Collector's Edition for all of the remaining books in the Bone Season series. Numbers are limited, so pre-order ASAP using one of the links below.

If you'd prefer to pre-order from your local independent bookshop, the ISBN for this edition is 9781408886069.