It's a real book

Is it seriously August already? Well, at least time's flying towards The Song Rising's release date . . .

I'll start off with the biggest news of the week, which has me grinning from ear to ear. In December this year, Bloomsbury will publish The Pale Dreamer, the story of the day sixteen-year-old Paige Mahoney became Jaxon Hall's mollisher. It's been so hard to keep my lips sealed about this project, which follows Paige and Nick as they hunt a poltergeist through London. I'm thrilled I can finally talk about it. 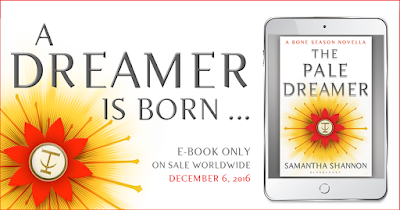 From the press release:

Bloomsbury is delighted to publish The Pale Dreamer, the exhilarating prequel to the extraordinary Bone Season series by Samantha Shannon. Fans of series will discover how Paige Mahoney’s gifts come to light, whilst for new readers, this is an exciting introduction to Scion London and the world of The Bone Season. Drawing on real characters from the Old Bailey archives, The Pale Dreamer shows us where Jaxon Hall and his gang, the Seven Seals, all began.

‘I'm thrilled to be able to expand the world of The Bone Season, and to show everyone a different, younger Paige, in The Pale Dreamer. I hope it gives readers something to look forward to before The Song Rising comes out in March,’ says Samantha Shannon.

The Pale Dreamer will be published by Bloomsbury in eBook, 6 December 2016. It will also be included as additional material in the beautifully rejacketed paperback edition of The Bone Season in February 2017.


The Pale Dreamer is now available to pre-order from all good eBook retailers. I can't wait for you to read it.

Add it on Goodreads

Listen to the playlist


The proofs are in

After about a year of hard work on it, The Song Rising has finally been typeset, and I will freely admit that I cried when I got it in the post from Bloomsbury. It took so long to get the manuscript just right, I was beginning to think I would never see it on paper. I'm currently working my way through the proofreading stage, where I can make final, small edits. This is the part where I get really obsessed with the rhythm and structure of my sentences. 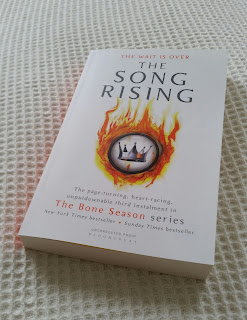 The third instalment of the series has panned out at 347 pages – quite a lot shorter than the previous two Bone Season books. When I first saw the page count, I wrestled with a slight sense of embarrassment that the book that's taken me the longest amount of time has turned out to be the smallest. After a two-year wait, I was worried that readers might be disappointed b y its length; that they might be expecting a huge, thick tome to offset the two-year delay. Then I remembered one of the golden rules of publishing: quality, not quantity. I've always promised myself that I'll never fill a book with unnecessary padding. Every book will be as long or short as it needs to be. As well as that, The Song Rising takes place over only two months – November to January – while The Mime Order spanned three and The Bone Season followed Paige over half a year, so the length makes perfect sense in terms of the story, too. I do suspect that this will be the shortest in the series; the last three will definitely be much thicker, while the fourth will probably be around the same size as The Bone Season. 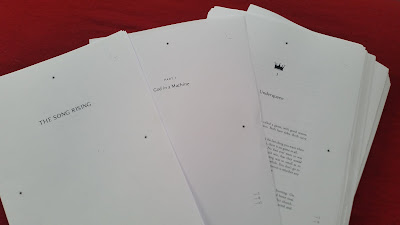 Last weekend was the weekend of the Young Adult Literature Convention (YALC), one of the biggest events in publishing in the UK. I look forward to this convention more than I do to Christmas, and it was just as much fun as it was last year.

My panel this time round was about writing fantastical versions of London – a subject I obviously love. I was joined by V. E. Schwab (Shades of Magic), Ben Aaronovitch (Rivers of London) and our wonderful host, Katherine Webber (Wing Jones), who got to reveal the beautiful cover of her book at the event. As always, I was in a state of shock when I saw how many people were in my signing line after the panel. It wrapped right out of my sight! Thank you so much to everyone who stood and waited for me to do my too-long signature and the red Scion stamp – you have no idea how much it means to me that you all came to see me. Thank you, too, to the terrific team at Booktrust who make YALC so brilliant every year. It's always such an honour to be invited, and to be part of the UKYA community. 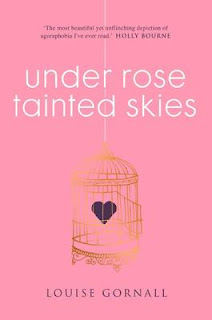 I've read quite a lot of books recently, taking advantage of a temporary lull in my writing as I edited The Song Rising and The Pale Dreamer. Yesterday I tore through Under Rose-Tainted Skies by Louise Gornall, a sensitive depiction of what it's like to live with agoraphobia and OCD. It examines mental illness, self-harm, personal boundaries and therapy, with just the right amount of humour and an ultimately hopeful conclusion.

My favourite reads of the last few weeks have been False Hearts by Laura Lam, Gemina by Amie Kaufman and Jay Kristoff, and The Star-Touched Queen by Roshani Chokshi. False Hearts is a dark, smart and diverse sci-fi thriller about one twin having to take the other's identity in a futuristic San Francisco; Gemina is the triumphant sequel to Illuminae, which was my favourite YA book of 2015, and The Star-Touched Queen is an extraordinary debut that blends Indian folklore with the much-loved tale of Hades and Persephone. I'd strongly recommend making room for all of them on your to-read pile.

I've also caved and bought a copy of Harry Potter and the Cursed Child. Originally I was going to avoid it, as I wanted to stay safe in the knowledge that all was well for the golden trio, but I've finally decided that I'm too much of a Potterhead to not read the eighth instalment.
Labels: The Song Rising updates