I'm sure many of you saw this on social media, but I wanted you to hear it directly from me, too. Time to gird my loins and have my George R. R. Martin moment.

The Song Rising is now coming out in March 2017.

Hear me out, Harry.

First off, I am really sorry for this delay. I know the original date of November 2016 came as a shock to some of you, after you spent a year waiting for news, and March 2017 sounds so much farther away. Two years and two months is a long time to wait between books – The Mime Order was out in January 2015 – and you've already been enormously patient. I completely understand that many of you will be disappointed.

I've always wanted this blog to be a place for me to talk frankly about publishing a book. The highs and lows. The complications. In the spirit of that honesty, I wanted to use this opportunity to show you that sometimes, things don't go exactly as you envisioned them – but also that it's sometimes for the best.

Various things that are out of an author's control can delay the publication of a book. Originally, I thought Bloomsbury had chosen to delay the release for some of those reasons. However, I have concluded that this delay is, in part, because The Song Rising's first draft was not as strong as it should have been. I didn't realise that at the time, but when I looked back on recently, I could see that it was lacking a strong core. There was a lot of great material, but something was just . . . not there. I felt the same reading it as I did when I read a very early version of The Mime Order, which I scrapped and never sent to Bloomsbury. It was like all the flesh and muscle and bone was there, but something was missing to bind them together. In hindsight, I think the root cause of this was simply that I rushed to send it to my publisher as soon as I'd finished a first draft – and it was literally a first draft, with minimal self-editing. It was hot off the keyboard when it landed in my editor's inbox. I raced to send it off because I didn't want my readers to have to wait a year and a half for the next book in the series. I assumed my editor would get back to me at top speed, as she did with The Mime Order. I desperately wanted Book 3 to come out in early or mid-2016. As a result, I sent Bloomsbury a draft that could have been better, which meant that my editor took longer to get through it and get back to me, which negated any time I'd saved by rushing to send it to her. Cue the long wait for notes and multiple rounds of edits that I've had to do over the past few months. I now recognise that if I'd taken a month or two to do a few self-edits beforehand, things may have moved faster.

In short, by trying to get the book to my readers quickly, I slowed things down. Lesson learned.

So here's what's happening now. The finished manuscript is due for April, and I'm on target, so I am nearly there. I am working around the clock, feeding myself mostly on Lucozade, to ensure I don't miss these final deadlines.

Now, you may be asking, ‘Why can't they just publish it in April or May?’ Well, they technically could, but publishers also need a while to promote an upcoming book. First, the finished manuscript has to be presented to, and read by staff at the publishing house; then it has to go out to early readers, bloggers, media, and so on – all sorts of things to make people aware that the book exists, and that it's coming out, and that they can read it soon. It also needs to come out at a time of the year when the publisher feels it will sell well; it can't just be shoehorned into the calendar at the earliest possible time.

You can think of these in-between months, the bridge between finished manuscript and publication, as the book warming up before a race. It's preparing to go into readers' hands, and it needs the best possible start.

On a personal level, I've come to understand that I need to accept my boundaries as an author. I pour my whole heart and soul and life into my books. When my publisher first told me that it would have to come out in March 2017, I was distraught. I had been working so hard to get the book finished, and I have always wanted to be the sort of author who could get them out on a yearly basis – but sometimes, certain stories take a while to tell. And The Song Rising has been one of those stories. Blood, sweat and tears have gone into getting this book right. It's more ambitious than The Bone Season and The Mime Order in terms of its scope, set in three different cities and dealing with many different characters and factions, so it was always going to take slightly longer to tease out and refine. It's the book that lifts the series onto the global stage, where the stakes are much higher. It's taken me a long time to accept that a larger story might take longer to get right; I equated being a bit slower with failure, and I shouldn't have. Something I've finally learned from this experience, which I'd like to pass on to any aspiring writers reading this blog post, is that it's okay, and usually the best approach, to take your time when you're creating.

I genuinely believe that Book 4 will take less time to write. It will almost certainly be the shortest Bone Season book before the monster-sized Book 5. But I'm not going to make any promises this time about getting the books out once a year, because I don't want to break those promises. I have to accept that these books will take as long as they take if they're going to be of the best possible quality, and I hope you guys will understand. I never want you to have anything less than my best work, and I never want to hold a book in my hands and know it could have been better, if only I'd taken a few weeks or months longer to get it exactly right.

So, March 2017. I imagine some of you will be able to get hold of ARCs before that, but it's still pretty far away. I'll be twenty-five by the time it comes out. Fortunately, Bloomsbury and I have some plans to help tide you over to Paige's next adventure.

On the Merits of Unnaturalness is officially coming out as an eBook!

On the Merits is the controversial first pamphlet by Jaxon Hall, written under the pseudonym An Obscure Writer, which explains all of the clairvoyant gifts in The Bone Season from his perspective. You may remember that we did a limited pre-order campaign for The Mime Order, where the first 500 people to pre-order got a physical edition of On the Merits, which was only available to a small number of territories. 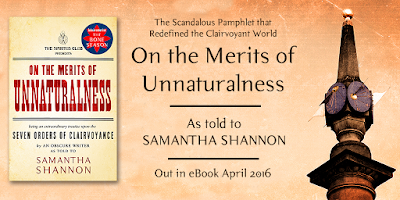 BUT NOW, On the Merits will be available for a from all reputable eBook retailers this April. Yes, Jaxon Hall is coming to a Kindle, Kobo or iPad near you. Even better news: my publishers in other territories around the world have also been given the go-ahead to publish it, so it may even be getting translated. When and how they choose to do this is up to them, but I'll make sure I put any information up here when I receive it. I'm so, so pumped about this, and so happy I can share it with more of my readers. I had a hell of a lot of fun writing On the Merits, and I think it's a great resource for those of you who want to learn more about the world of the books.

And one last thing

There's also another very exciting piece of Bone Season news coming later in the year. I can't give you exact details just yet, but let's just say . . . it's something else for you to read. Keep your eyes peeled for an announcement at some point. And for Song Rising teasers as we creep closer to publication.

Thank you, as always, for your endless patience, kindness, and understanding as I work through this last stretch of editing. I am very lucky to have such brilliant readers, and I hope you'll always feel as if the wait for my books has been worth it.