Welcome to the final Crash Course entry! You're almost ready for The Mime Order. This week we're taking a gander at the planes of being, or planes of existence: Earth, Netherworld, the æther, the outer darkness and the last light. These five planes make up the wider cosmology of The Bone Season series' universe. Again, please note that this is not a comprehensive description of the cosmology – it only covers what has already been covered in the series, with a few tidbits of extra information.

First, you'll need to be familiar with an important concept described by Nashira in The Bone Season, which is called the ethereal threshold. In the world of the series, you have a choice when you die. You can either go straight to the last light – a final death – or you can hang around in the æther, where you can still be used and contacted by clairvoyants. If you hang around, you become known as a drifter. The problem is that your presence affects the ethereal threshold. The more spirits linger after death, the higher the threshold gets. This, in turn, affects the natural order of the five planes, and things start to go wrong.


Diagram of the five planes 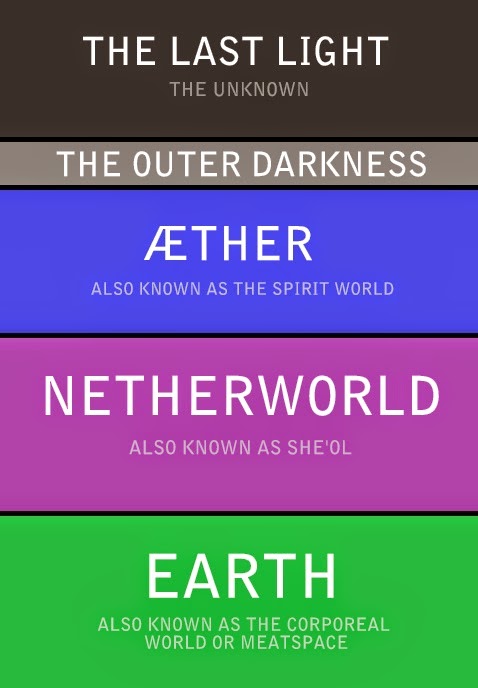 EARTH is the world in which the majority of The Bone Season takes place, also known as the corporeal world, the physical world or, in voyant slang, meatspace. Simply put, it's where you are now: the domain of human beings and other mortal life forms. By the year 2059, Earth's dominant political entities are the ever-growing Scion empire, led by the Republic of Scion England, and those countries that are not part of it, collectively called "the free world", which lack clear leadership. Earth is currently afflicted by a large number of problems, including wars between free world countries and rising sea levels.

Clairvoyant humans are unique among Earth's inhabitants in that they have a link to another plane – the æther – via aura. This means that they can interact with the æther while they are still alive. Sometimes spirits in the æther, such as poltergeists, can make an impact on physical objects and inhabitants of Earth. Since the breaking of the ethereal threshold, Earth has also been exposed to the Netherworld via small portals called cold spots, which have allowed the Netherworld's residents, the Rephaim and the Emim, to cross over and inhabit its cities.

The dreamscape is sometimes classified as part of Earth and sometimes as its own plane, depending on preference.

NETHERWORLD, also known as She'ol (from Hebrew שְׁאוֹל) and occasionally the half-realm, is the midway point between Earth and the æther, the living and the dead. Its original purpose was to act as a "limbo" for spirits to come to terms with death and prepare for the journey to the last light, but it has long since fallen into decay. Its inhabitants, the Rephaim and Emim, began to cross over to Earth in 1859, when the ethereal threshold reached its highest ever point in history. There, they occupied the city of Oxford, which they renamed Sheol I.

Very little is currently known about the Netherworld.

THE ÆTHER is the spirit world, known by Scion as the Source. The word comes from the Greek αἰθήρ, referring to the essence breathed by the gods. Originally set apart from the physical world, it now flows through and around it. The spirits of the dead exist in the æther, but they can also be used and contacted by clairvoyant humans on Earth. The adjective given to things relating to the æther is ethereal (e.g. ethereal threshold, ethereal batteries).

Clairvoyants are linked to the æther via aura. Aura plugs a voyant in to the æther's energy, allowing them to access and channel it in various ways. However, only one kind of voyant – the rare dreamwalker – can actually enter the æther in spirit form.

THE OUTER DARKNESS, while technically part of the æther, is often considered a separate realm. The phrase is taken from the Gospel of Matthew. It is a distant reach of the æther, very close to the last light, where spirits can no longer be reached by voyants. Spirits that travel to the outer darkness may be able to return, but it is thought to take a great deal of energy to call them back.

Spirits can be sent to the outer darkness with the threnody, a series of words uttered after death. It is often considered a mercy, as the spirit will no longer be tormented, but it may also be performed against the spirit's will.

Last light
THE LAST LIGHT is a gateway at the farthest reach of the æther, just beyond the outer darkness. It is generally agreed that it leads to a final death from which there is no return. As nobody has ever come back from the last light, next to nothing is known about it.


I really hope you've enjoyed these Crash Courses and found them helpful. I'll also be posting a list of the characters to refresh your memory a bit closer to Book 2's publication in January.

In other news, I got a lovely review for The Mime Order today from Publishers Weekly! I'm thrilled. (Warning for minor spoilers.)
Labels: Crash Course The Bone Season The Mime Order