Thanks for your great response to the first Crash Course entry!

This week's entry, requested by Julie, focuses on the visual world of The Bone Season – namely the spirit sight, auras and the sixth sense. There's a splash of history and On the Merits of Unnaturalness, too. Remember, if there's anything you'd like me to cover in future blog posts, give me a shout in the comments section. I stress that I can't give away anything that hasn't already been revealed in the books; this is just to clarify anything that we've already encountered in The Bone Season that you'd like me to expand on.

Aura
Aura is our direct Link to the Æther . . . [it] attracts and compels
most Spirits, endearing them to us, and allows us to sense their Presence.
— Excerpt from On the Merits of Unnaturalness 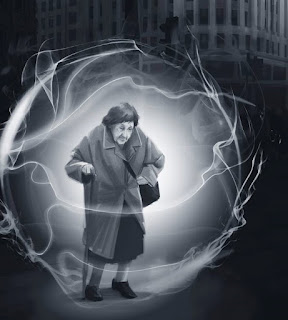 In the world of The Bone Season, aura is what identifies you as clairvoyant, understood to be a biological phenomenon. Aura is a clairvoyant individual's personal link to the æther, the means by which they tune in to the spirit world.

Aura does not manifest in any one way. An aura can be bright or dim, fast-moving or slow, small or large. Danica has a bright aura that looks like an electrical storm around her; Warden's is much calmer, dark and soft, like smoke; Nashira's, on the other hand, is badly corrupted by the multiple gifts she has. A person's dreamscape tends to have the same dominant colour as their aura.

In 2031, Jaxon Hall, author of On the Merits of Unnaturalness, observed in his pamphlet that there were roughly seven colours of aura and that people within one of these groups generally exhibited similar abilities. He proposed that these seven groups should be grouped as follows:


Summary of the Seven Orders of Clairvoyance


~
On the Merits of Unnaturalness was a controversial and groundbreaking document, the first proper attempt to categorise clairvoyance. The controversy stemmed from the fact that it it suggested that the highest three orders – guardians, furies and jumpers – were superior to the other four. This caused a spate of gang wars and resulted in the permanent imprisonment of one sub-type of augurs, the supposedly violent "vile augurs", in the putrid slum of Jacob's Island. By the time Paige enters the syndicate, the Seven Orders system is widely accepted throughout the voyant world in London and elsewhere.

Spirit sight
The Unsighted report that instead of perceiving Colour, they
receive a unique Indicator from each Aura, allowing them to
make an Estimation of what Type of Clairvoyance is being displayed.
— Excerpt from On the Merits of Unnaturalness
All voyants can sense the æther to some degree. Their sixth sense allows them to pick up on nearby spirits and to exert some control over them by making spools, something that all voyants can do with a little practice. However, not all voyants can perceive the spirit world visually.

Around 85% of voyants in London are described as being sighted, or having the spirit sight or third eye. Sighted voyants display a keyhole-shaped defect in one or both eyes, which is similar to, and named after, the real-life coloboma (a gap in the iris). People with only one coloboma, like Nick, are described as half-sighted. This means that they can switch their spirit sight on and off whenever they please. People with two colobomata, like Jaxon, are full-sighted and forced to see spirits constantly. The sighted report spirits manifesting in a number of ways: threads of glowing colour, floating sparkles, pulsing zigzags, or flurries of bright spots.* Colobomata are a recognised "symptom of unnaturalness" in Scion citadels; consequently, voyants working in ordinary jobs wear dark contact lenses to conceal them from the authorities.

The other 15% of London voyants have no colobomata at all, and are known as the unsighted or spirit-blind. This is different from the kind of "blindness" exhibited by amaurotics, who have absolutely no sense of the spirit world at all.** Spirit-blindness tends to be exhibited by the higher orders, particularly jumpers and furies. Paige has never been able to see spirits visually.


It had always been my dream to be at least half-sighted, but
I remained spirit-blind. I couldn't see the æther's
little lights; I could only ever sense them.

Unsighted voyants sometimes report very small disturbances when they see an aura or spirit – a slight ripple, or a dark spot in their field of vision. When voyants are unsighted, they generally develop a greater sensitivity to the æther and can learn to identify auras and spirits from the way they feel.

As a jumper, Paige's sixth sense is extremely sensitive. Having honed her skills with Jaxon Hall, she is able to categorise auras even better than some of her sighted companions in the Seven Seals can, as she can detect subtle nuances that they can't. While Eliza could see a blue aura and know that the voyant is an augur, Paige might be able to identify the particular type of aura, e.g. tasseographer or haematomancer.


* This was inspired by the kinds of visual phenomena experienced by people who suffer from migraine with aura.

** The word amaurotic comes from the Greek amauros, "dim", referring to a kind of blindness that occurs without damage to the eye.
Labels: book extras Crash Course