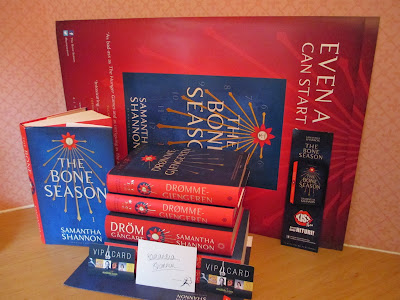 It's the Bone Season winter giveaway!

You guys have made 2013 the most memorable and exciting year I've ever had. You've read my blog, bought The Bone Season, come to my events, and supported me in countless other ways. To celebrate the release of the paperback cover today (look out for it at 4pm BST), and to thank you all so much for a wonderful publication year, I wanted to give you the opportunity to win some gifts in time for the festive season. The prizes up for grabs are:

If you're interested in any or all of these prizes, scroll down to the appropriate giveaway box below. Feel free to enter for as many as you like. If you have any questions about the prizes, ask in the comments section and I will answer as soon as I can.

As part of this giveaway, I have obtained two first edition hardbacks of The Bone Season from Bloomsbury. As I mentioned in previous blogs on signings, first editions are going for fairly high prices on eBay, which has disappointed some people who were hoping to get one. I would really like fans of The Bone Season and private collectors to have an opportunity to win a first edition, so I ask that if you enter to win one, you agree to have it personalised with a name, whether it's yours or a friend's. Both copies come with a Scion stamp above my signature that I have only put on one other book.