It's November – National Novel Writing Month. I love having a birthday in a month so strongly associated with writing. This Thursday I'll be turning 21. The last two years have gone by like that. Scary that I'll be nearly 22 by the time The Bone Season is published. So altogether the process of Book 1 will have taken about four years, as I started writing it when I was 19.

This week I'll be answering some neglected questions and doing a little challenge from Booklover. I'm doing this because it gives me the chance to talk about my personal life as well as books. Which may or may not be interesting...

Just in case anyone has any more questions about editing, I will be doing a summary of the edits as soon as Alexa confirms that we've officially finished them, so if you have any specific questions you'd like me to answer for that then go ahead and leave one in the comments.

The edits are finished! Again. I sat down on Sunday night and got them done. I know a lot of you have been surprised by how many edits I've done on The Bone Season, but editing is all part of the process. I imagine the amount of editing differs between each author and each book. I keep toying with characterisation and dialogue, trying to get it exactly right. There's been so much early interest in The Bone Season and I want to make sure this book is the absolute best it can be by the time you guys finally get to read it. I want to start off this series with a confident debut. I've got so much planned for the other books, so I hope The Bone Season will provide a strong beginning.

In film news, I'm making up a portfolio of my ideal cast members and some visual references. I've asked my friend Leiana to do some drawings of the characters – she's incredibly talented.

Like I said, this challenge is from Booklover and involves answering a series of questions, which may or may not be related to writing. I've cut out some of the questions so this post doesn't get too long, but I hope this is enough!

I'm fairly new to blogs – I only started blogging regularly this year – but I do like to peek at book blogs. I find them refreshingly in-depth. Professional critics are often restrained by word limits, so it's great to see readers being able to offer extensive analyses of books they've enjoyed (or not enjoyed, as the case may be). I also like urban exploration blogs.

2. Who are your favourite writers and why?


My favourite living writer is Margaret Atwood, whose book The Handmaid's Tale, along with 1984 and Wyndham's The Day of the Triffids, first got me interested in speculative and dystopian fiction. I've been meaning to read her novels Day of the Flood and Oryx and Crake for so long. The majority of writers I love, however, are long-dead. Emily Dickinson is my absolute favourite poet – I chose her as my Special Author for my degree, and many of the themes in her poetry have inspired me in planning The Bone Season and its sequels. If there was one poet I could bring back to life, it would absolutely be her. More on Dickinson later.


Other poets I admire include the legendary Dr John Donne, who I first studied during A-Levels. Donne was a 16/17th-century metaphysical poet, contemporaneous with Shakespeare, who wrote the hilarious poem 'The Flea'. If you haven't read it, do. It involves a man desperately trying to persuade a woman to sleep with him on the grounds that they've both been fed on by the same flea, so they've pretty much had sex anyway ('This flea is you and I, and this / Our marriage bed, and marriage temple is'). He's a bit mournful when she squashes said flea. 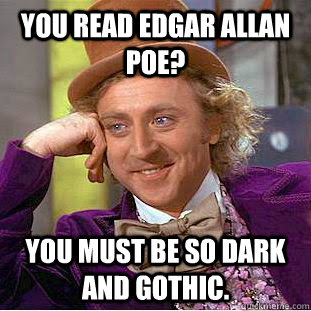 I adore Edgar Allan Poe. The man needed a hug. His short story The Pit and the Pendulum is one of the best expositions of terror I've ever read – Poe was a master of suspense. His poetry is classic macabre, if you're into being Really Really Dark. Another favourite verse-spinner is the Pearl-poet, an anonymous Middle English writer who is thought to have written Pearl and Sir Gawain and the Green Knight, among others. In terms of prose, the authors nearest my heart are all three Brontë sisters (including Anne, who is too often overlooked), Charles Dickens, Isaac Asimov, J. K. Rowling, Enid Blyton, Jane Austen, and many others.

3. What is the best thing that has happened in your life?

Getting The Bone Season published, seeing the Great Pyramid at Giza, and my siblings being born.

4. Who would you like to meet right now and why?

Emily Dickinson. She sounds like a fascinating person – and like Poe, I think she needed a hug. There's a misconception that Dickinson was extremely antisocial due to her isolated lifestyle, but her letters and poems call out for companionship. One poem states "This is my Letter to the World / That never wrote to Me". She often invited her friends to visit her and received no reply, though she had a very close relationship with her sister-in-law, Susan.

5. What is your favorite time of year and why?

Winter. It's my birthday season. I love seeing everything covered in frost. There's something quite romantic about writing in on a dark morning with the heater on, some good old-fashioned music and a cup of coffee, looking out at the snow and rain. In the summer I'm too busy trying to keep cool to focus properly until the sun goes down.

Cliché alert: I can hardly remember a time when I didn't write. Creating stories is part of me. I write because I love to create, because I love to build worlds, because I love to develop characters, and because I want to share my words with other people. When I discovered writing it changed the course of my life. Since I was 13 and first penned a story, I've never stopped.

Everywhere! I love travelling. Top of my list at the moment are New Zealand and Australia. I've had so much support from down under and it sounds like such a gorgeous place. I'd also like to visit Asia and South America, as I haven't been to those continents yet, and to return to Sweden and perhaps explore a bit more of Scandinavia. I'd love to visit all the countries where The Bone Season is being translated, too.

9. What makes you happy?

Lots of things, but so long as I can write I'm usually pretty happy.